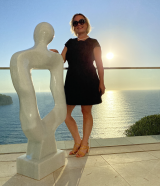 … between abstraction and figuration ... … between ideal volume and simplicity ...

The reduced-abstract sculptures made of stones, bronze or steel by Swiss Canadian artist Evelyne Brader-Frank (*1970) are a celebration of life. Voluptuous, sensual curves, full feminine body or slender statues with delicate silhouettes: her feminine contemporary interpreted archetypes celebrate above all the dance of curves.
Her unmistakable signature in her artistic work lies in the beauty of the human form interpreted in her own abstract language. She draws her inspiration from the female figure with its sensual contours, its expansive volumes, its vibrating radiance, and sublime finesse. The extreme formal reduction is the trademark of Evelyne Brader-Frank. A tremendous artistic influence on her creative work comes from the bon mot: "If I had had more time, I would have written you a shorter letter.”
Evelyne was born and raised in Switzerland into an artistically talented family. Influenced by her grandfather, a landscape artist, and her brother, a surrealist painter, Evelyne had the opportunity to experiment with various mediums (pencil, aquarelle and airbrush). After a banking education, Evelyne enrolled in her first sculpting class in 1990. Unlike other artistic methods, sculpting allowed Evelyne to express herself three dimensionally. She learned to work with many different types of stone but always found her way back to soapstone, the medium in which she could best express herself.
By the end of 1994, Evelyne left Switzerland and moved to Alberta where she did not only expand her work into Bronze, Concrete and Ice. She established herself as an acclaimed sculptor and is today successfully represented by leading galleries in Canada and Switzerland. Evelyne's dynamic male and female figures are celebrations of form and the beautiful stones that they emerge from. Fascinated with classical mythology, Evelyne titles her sculptures after personalities from Greek and Roman myths, looking for a match between a character and her feelings for the new sculpture. Evelyne Brader-Frank presently lives and works near Zurich in Switzerland.